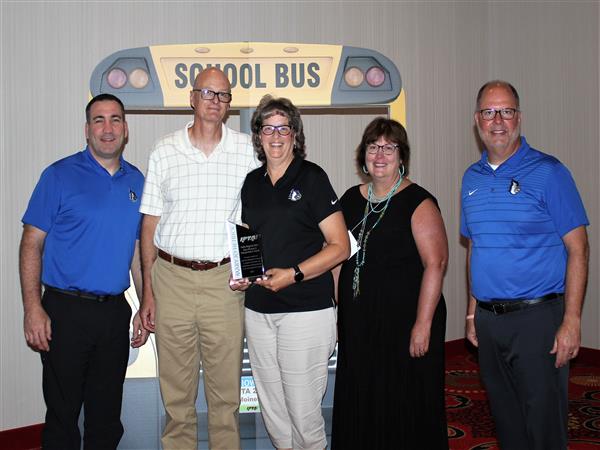 "Mary Jo Hetrick is very progressive in her thinking to help make her school district thrive with efficiency. She’s driven to always look forward, and her passion for the industry is second to none. She has been involved in school transportation for about 18 years, with the last six at her current school district. She is always engaged in the latest ideas to make the school bus ride safer for the students and drivers alike," said Max Christensen, State Transportation Director for the Iowa Department of Education.

Hetrick was promoted to director in July of 2018 after serving as an assistant to the department for three years. Prior to joining Bondurant-Farrar, Hetrick served as a site supervisor for the Saydel and Colfax-Mingo transportation departments, and a bus safety trainer for Ankeny Schools. Hetrick has served in education since 1998 and driven a school bus since 2004.

During today's award presentation, Hetrick was accompanied by her husband Mark Hetrick and close friend Jill Reinke as well as Bondurant-Farrar's Rich Powers and Chad Carlson. Please join us congratulating Mary Jo Hetrick for earning this award and expressing our appreciation for her leadership and service to the Bondurant-Farrar school community.