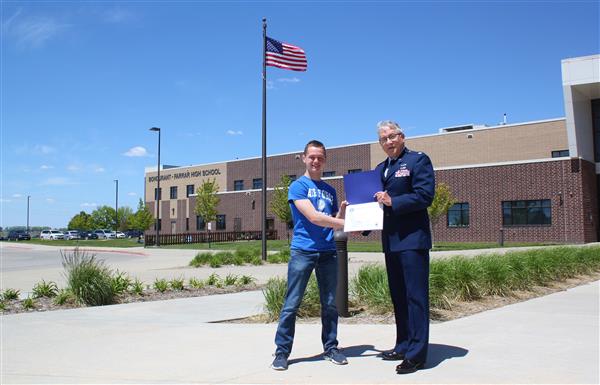 On May 12, 2021, retired Lieutenant Colonel Jim Freese visited the Bondurant-Farrar High School to present senior Rylie Anderson with a Certificate of Appointment to the United States Air Force Academy in Colorado Springs, Colorado.

As stated in a release provided by the academy, “Anderson joins a select group of the Nation’s finest young men and women as he takes a challenging and rewarding step toward becoming a professional Air Force Officer. Rylie has clearly demonstrated that he has what it takes to meet these challenges.”

Appointments were awarded to only about 1,200 of the approximately 10,000 applications submitted.  Additionally, each member of Congress is only allowed to have a maximum of five cadets attending the academy at one time.

During his time at the academy, Anderson will study such subjects as aeronautical engineering and political science, and will have the opportunity to participate in programs such as flying both powered and non-powered aircraft. Anderson will graduate with a bachelor of science degree in his choice of 27 majors and he will be commissioned as an officer in the United States Air Force.

As a member of Bondurant-Farrar’s Class of 2021, Anderson has earned several academic accolades and will graduate high school with 15 college credits, a 4.065 weighted cumulative grade point average, and an ACT composite score of 35. For his distinguished academic performance, Anderson was named one of 7,500 National Merit Scholarship recipients. Outside of the classroom, Anderson is a certified pilot and, as a member of Bondurant-Farrar’s wrestling team, he was a three-time state placewinner at the Iowa High School’s State Wrestling Tournament.